The Impact of Concussions on Children 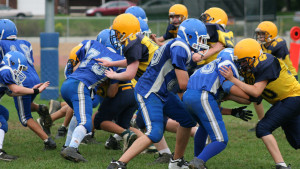 Concussions are a common occurrence in many sports and recreational activities that affect 1.6-3.8 million people in the United States.1 Concussions can happen quickly and often go undetected with little or no symptoms, until they manifest as larger problems years later.

Concussions pose a major challenge to health care providers due their intricate nature. Concussions are also known as Traumatic Brain Injury (TBI) which happens when the brain moves inside the skull, typically caused by some sort of trauma. Symptoms may be obvious such as nausea, fatigue, and headaches; however, some signs are very small and go unnoticed.

A major concern at the moment is concussions in sports, both amateur and professional. Identifying a concussion after a hard hit is challenging as the markers may not develop until days later. It is common for sports teams and players to “tough it out” to win a game. This risks losing long-term health and stability.

Youth sports have perhaps the highest risk to have long-lasting negative effects as a result of a concussion. The developing brain of any child is more vulnerable to concussions. After the first concussion, the chance of getting a second or third concussion increases by 150%. The standard in on-field concussion screening misses an estimated 40% of concussions, and 50% of high school-age athletes did not self-report concussions. A direct blow to the head does not need to occur for a concussion to take place. A whiplash injury from a blow to the body can cause a concussion. It is time to take a different look at concussion diagnosis and relief to get to the cause of the issue.

Concussion Specialist Dr. Geoff Besso is helping patients get natural relief from concussions in Stow, Ohio. Dr Besso is a specially trained Upper Cervical Chiropractor who deals with the Atlas Bone (C1 vertebra) as it relates to the brain and nervous system function. Clinical studies have shown that when the Atlas bone under the skull is misaligned, it affects the fluid that delivers oxygen and also provides protection to the brain, one of the main side effects of concussions.

When the Atlas is restored to its proper position by an Upper Cervical Chiropractic adjustment that fluid flow is restored, and brain function can return more quickly.2 Concussions and related symptoms can heal at a faster rate when the brain properly receives the appropriate nutrients and oxygen.